Sometimes the characters in a book are happy, excited, engaged in their lives, having adventures, and when you read the book you get fired up thinking about doing things like they’re doing. And sometimes a character is suffering. Some negative emotion is overwhelming them, and the book isn’t immediately viscerally pleasurable to read, but the description is so vivid and rich you can’t stop reading, you feel like you are learning of the depths of human experience, although in some sense the book makes you unhappy.

Recently, unintentionally, I have found myself reading several of this second type of book. These books are very good, and I recommend you read any of them that strike your fancy. They ring a bell in my head, it sounds a beautiful note, but it is a negative feeling, a bad one, and I don’t to eject it per se, but I want to crystallize it and set it aside to be known rather than felt. So I am encasing my thoughts about these books in this blog post, to exorcise them, and perhaps share them with you, o blog reader.

The Death of Ivan Ilyich and Other Stories

There are a number of different Tolstoy story collections; this collection is the one I read.

No surprise - the best story here is the title story, The Death of Ivan Ilyich, and its emotion is the fear of death. There are so many portrayals of death in modern culture, but almost always as a quick, violent death, happening to somebody else. Ivan suffers slowly, with doctors trying to help but achieving nothing. His family members are both constantly near him, and not really close to him, growing emotionally further away as he comes closer to death and they remain alive. Is it possible to understand how you will feel when close to death? Do we want to understand that?

Another great story in this collection is The Kreutzer Sonata. Its emotion is jealousy. It’s a real song, and it fits the story perfectly. It’s a sonata for violin and piano, played by two people. The main character’s wife plays this sonata with another man, and the emotional bond it forms between them drives the main character insane, sending him into a jealous, violent rage.

I think you should read this story and simultaneously listen to the sonata. I lack the words to describe music well, but in the “presto” part the violin and piano are handing the melody back and forth, slowly building its intensity higher, and it just perfectly matches the main character’s rising insanity. Start it when you get to the part where the main character starts talking about the Kreutzer Sonata.

Try listening to this version on Spotify. Gidon Kremer and Martha Argerich are great musicians, but also, they have become my mental image of the characters. Look at them: 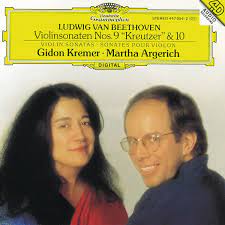 Doesn’t Martha Argerich look like she could be the beautiful woman around which the love interests revolve in a Tolstoy story, and Gidon Kremer, with that mildly goofy grin, look like he could be the sort of guy who at first seems like an innocent nerd and then sneakily charms someone’s wife?

Some critics, like Harold Bloom, think Hadji Murat, also in this collection, is one of the greatest short stories of all time. I was surprised to see that after I read it. My initial impression of the main character (Hadji Murat) was that he is a naive and corrupt loser. He expects to be able to convince the Russian empire to change its military strategy, while being ignorant of its bureaucracy. He’s bitter that he has been fired by his side’s leader. And what he wants is to be installed as a local ruler, as the guy who betrays his own side in the war. Indeed, he ends up failing to accomplish anything, dying pointlessly, basically getting what he deserves. So, a decent story, but nothing special. Reminds me of a bunch of real world stories from Afghanistan.

But apparently many readers see Hadji Murat as a hero, a noble warrior who represents bravery and ambition? I still liked the story as a collection of vignettes about this eternal empire-vs-a-foreign-culture war. I feel like there is this core assumption that it’s noble to kill a lot of people while achieving nothing because of the glory of war, and people who like the Hadji Murat character must agree with that assumption, and I don’t. It’s odd to me because War and Peace, which Tolstoy wrote before writing this story, seemed like it was strongly in opposition to that view.

The Luminous Novel is about procrastination. The author is a semi-famous writer who gets a big grant to finish his masterpiece. He starts recording a diary of everything he does, during his “year of finishing the masterpiece”. And it’s just chock full of complete wastes of time. Like, hex editing shareware to get around copy protection, when he is “supposed” to be working.

Is it an interesting diary? It reminds me of Knausgaard in some ways - just much more realistic than you would expect, and that aspect of it makes up for a lack of narrative or point. About halfway through the book, I decided it was pointless, but somehow curious, and I evaluated the book as “not that great” but figured I’d keep reading anyway because, well, I was stuck in Tahoe and the I-80 was closed so I was going to be reading something and I just wanted to great it.

And then maybe 85% of the way through the book, he’s like, okay. So I couldn’t do it. I failed. Instead of my masterpiece, I have this diary. I have a little bit of other stuff but it just didn’t come together. Then the last 15% of the book is what he has of the masterpiece, and it’s amazing. Gripping, realistic, vivid, each page is everything you want of a great novel. It just doesn’t fit together. There’s no real overall plot, no consistent set of characters, only this dream of sharing this luminous feeling at the heart of his life and love.

So did he do it? I feel like he successfully got 15% of the way there. He died shortly after the period recorded, and this novel will forever be a partially great novel.

The whole time he’s waking up at 3 pm, going to sleep at 8 am, and trying a slew of weird herbal remedies. He mentions right at the end of the book that he stopped drinking coffee and this seems to have magically fixed his terrible sleep problems and made him healthier in other ways too.

I found this book to be inspirational, honestly. He could have produced a truly great novel. He succeeded at a lesser goal - making a good, but fairly weird novel. I think the secret is a really mundane one - he just should have wasted less time and improved his health by taking the standard actions that everyone recommends to do these things.

I finally succeeded in reading this book on my third attempt. Sometimes a difficult book is like a difficult hiking trail - if you’re in shape, and you have the right gear, you can enjoy a beautiful hike, when somebody out of shape wearing flip flops finds it to be a painful slog. Perhaps recently I have been getting into better “reading shape”.

Most “antihero” characters have a fixed sort of badness, but they are likeable, so you root for them as the story goes on, and they just stay how they are. It’s like the reader agrees to suspend their disbelief and pretend the character is good, and just pay attention to the exciting actions and hope they turn out well for the antihero. Sometimes the antihero is only a little bad, like an art thief who steals art and never hurts anyone, and you just permanently accept that this sort of little bit of badness is okay. Or perhaps they die in the end to achieve moral balance, so that you can be left feeling that things worked out appropriately.

Raskolnikov is different. He commits murder, sort of because he needs money, but also because he sort of has a philosophical view that he’s special and the regular rules of morality don’t apply to him. His thinking just isn’t very clear at the time. And then it is impossible for the reader to consistently root for Raskolnikov, because he doesn’t even consistently root for himself. His guilt becomes stronger and stronger, eventually crushing him. He isn’t like the crooks in a heist movie who cleverly try to evade the law - he’s distracted by his own obsession about what he has done, slowly becoming less and less able to even try to evade the police.

Which Raskolnikov is the more sympathetic one? The cool and calm protagonist we see at the start who thinks he can get away with murder, or the emotional wreck unable to face his family as he drags himself to the police station to talk to the investigator, unsure whether he should admit to the murder? Are we rooting for Raskolnikov to get away with it, or are we rooting for him to do the right thing, and confess?

The Metamorphosis is supposed to be Kafka’s masterpiece, but I think I liked this one better. (I read this translation.) The Trial is about that frustration and dread you feel when interacting with a huge bureaucracy.

Of all these books, The Trial was the most painful to read. It’s a good thing it is relatively short. I would read a bit, pause, and just feel miserable. Sometimes it was hard to say why I kept reading. But, at the same time I strongly recommend this book.

There’s a difference between how it feels in the moment to read a book, and how it feels to have read a book. It’s like a weekend afternoon where the kids are causing all sorts of trouble, and it’s so frustrating, but for a fifteen minute period everyone is behaving so nicely, and you snap a picture of mom and the kids baking muffins where everyone looks so happy, and it’s a great picture so you look back at it later and have great memories, so you keep coming back to the Good Muffin Recipe, and in the end a great tradition is formed.

Except, instead of eating delicious muffins, the payoff here is… a deeper understanding of the emotional nature of being frustrated by impersonal forces? Hmm. Well, it’s a great payoff, trust me.

Josef K is arrested. He asks what he’s being arrested for. Nobody knows. It’s not that they won’t tell him - they’re happy to tell him what he’s being arrested for. But that happens at a later stage in the process. What is the process? Well, it’s not as simple as just explaining what the process is. The best way to handle it is to find a good lawyer, or at least not one of the many lawyers who will mislead you about the process more than they clarify. Of course, that isn’t straightforward. But good luck. Don’t miss your first hearing. When is the first hearing? Well, it isn’t precisely a “hearing”, it’s more like a discussion that gradually merges into a hearing.

And so on. It’s like the nightmare where you forgot to turn in your homework, plus the nightmare of being late to an important event, plus the feeling of getting a notification from the IRS that you filed your taxes wrong, all expanded out into a novel. There is nothing else quite like it.

Kafka himself was essentially a middle manager in a large insurance company. He was considered “tireless and ambitious”.

This is enough. These books are great, but this is all the negative novel I can handle, for now. Next I am going to try to read something full of joy and delight.