Recently the Antiwork subreddit has gotten really popular. I was interested by Sriram’s analysis: 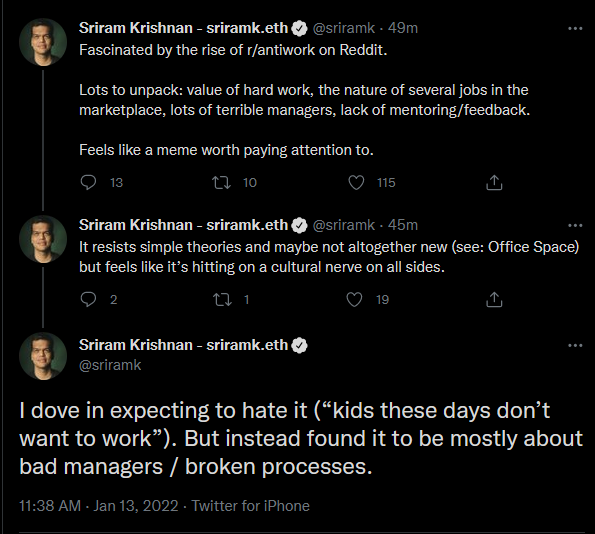 and the subsequent response on r/antiwork.

I feel like “bad managers and broken processes” isn’t quite what’s going on here. That does come up a lot in the top stories. Someone gets fired for offending one ridiculous customer, someone gets a $40 tip and then their boss takes it away, managers do mean things to try to convince people to stay at their job after they quit. The absolute worst stories, those often have bad managers and broken processes. But the core problem is that many jobs are just fundamentally miserable, too miserable for good managers or good processes to fix.

After I graduated college and before I started grad school, I spent the summer in Boston living with a friend, and I was looking for a summer job just to have something to do. It was harder than I expected to find something; I couldn’t find a job that was happy to take someone for just a few months. I ended up lying on my resume and saying I was an artist who dropped out of college. Finally I got a job at The Gap.

Working at The Gap, the processes seemed fine, and the managers were very kind and helpful people. It’s not a hard job. You basically just stand around, fold clothes all day, and watch the other employees to make sure nobody steals anything. But, I think if I worked there my entire life I would hate capitalism and become a huge antiwork supporter.

The Gap is not great

There are three main problems with the job. One problem is that it was extremely boring. Another problem is you made about $7 an hour. At 40 hours a week that’s somewhat over poverty level. But the third problem is that you can’t even get 40 hours a week. There’s no commitment to how many hours a week of work you can get. I think this was fundamental to the nature of the business - the management had these projections of expected foot traffic based on seasonal projections, past holiday performance, new promotions, and it varied a lot. I don’t really think better processes would change this. As long as The Gap is allowed to hire part timers with shifts chosen at a moment’s notice, they will choose to do so.

There were two types of worker at The Gap. The “transients”, like me, were just working a minimum wage job for a little while and not too concerned about making the maximum amount of money we could. The “lifers” were older and had responsibilities and tended to grab as many shifts as they could. You couldn’t survive as a lifer unless you had a second job. But the stress of two part time jobs spreads out far beyond your work hours. Every weekday, every weekend day, you’re hoping for one of the two to come through, and if you really need the money, you can’t plan anything in advance.

Can good managers or good processes do anything here? The job just sucks and it always will suck. At least nowadays if you do gig economy work for Uber or DoorDash you can choose when your part-time work is. That seems way better for second jobs than trying to get compatible shifts from two bosses.

That summer I learned so much about folding clothes. I was really, really good at folding clothes, just one second and it’s snapped into a crisp rectangle, and then a year later I forgot all my skills and nowadays the quality of my folding is quite unimpressive. More importantantly it showed me how terrible some jobs are and about how grateful I should be to not be stuck there.

The antiwork movement makes a lot of sense for people who are stuck in a bad job. It isn’t “solution-based” like people advocating communism or a universal basic income. But, maybe that’s a good thing, because neither communism nor a universal basic income is a great solution. The antiwork community is a place for sharing how unhappy people are with their jobs. It’s growing, waiting for a better solution to arise.

At the end of the summer I went to pick up my last paycheck on the way to the airport. I couldn’t just say, hey I had a grad school fellowship lined up in California this whole time, bye! So I made up a story about how my cousin got me a job working at a casino so I was moving to Vegas, and as I left a coworker ran after me and was like… “Can your cousin get me a job too? Please, help, you have to at least try!”

I said I would try and then never got back to him. I hope he found something better.